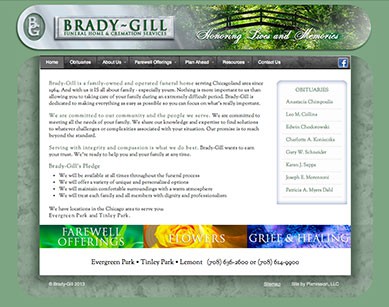 Brady-Gill, a well-known family business in the South-West suburbs of Chicago, is an early pioneer in providing extended online content in funeral planning and grief counseling.  They found themselves in a situation with their subscription-based, industry-specific web hosting provider, as the funeral industry has been consolidating, having also become one of their primary competitors in the funeral market itself.  They needed independence.

We worked with graphic designer Mitch McNeil to create a new Joomla! site wherein all content was directly owned and controlled by Brady-Gill.  We pulled legacy Obituary and Guest Book data from the old system, preserving and importing the data into a new custom system built within Joomla!.